About the House of Blues

Nearly three decades ago, House of Blues was founded with a simple but powerful mantra far ahead of its time in the U.S.:

The pursuit of peace, love, community, and acceptance has guided the organization’s cultural development daily and continues to gain new meaning and applications over the passing of time

House of Blues is committed to using its venues, voice, and platform to advocate passionately for human expression, racial equality and spiritual harmony.

The House of Blues mission is to celebrate and demonstrate the power of music to bring people together. Its founders drew inspiration from world culture, art and spiritual tenets in order to create a welcoming environment that would bring forth the mantra, Unity in Diversity. The views were and are progressive and philanthropic in nature, as demonstrated by the original mission statement:

To create a profitable, principled, global entertainment company to celebrate the diversity and brotherhood of world cultures. To promote racial and spiritual harmony through love, peace, truth, righteousness and non-violence.

The founders of House of Blues embraced American blues music as a testament to its mission, and sought to celebrate blues history through live music, art and cuisine.

House of Blues venues are home to the largest permanently displayed collection of Outsider and American Folk Art, often referred to as Southern Vernacular Art. More than 150 untrained, self-taught and mostly African-American artists are represented in this living museum that features artwork that is as diverse as the music on the House of Blues stages. Notable artists such as Mose T., Jimmy Lee Sudduth, Leroy Almon, Roy Ferdinand, Howard Finster, Richard Burnside, Ruth Mae McCrane, Jon Bok and Archie Byron, to name just a few, created emotional, raw, primitive and powerful pieces which serve as a Visual Blues, and is exhibited on the walls of all its restaurants and music halls. Art and music portraying 20th century black Americans is a powerful representation of the cultural journey toward healing the traumas of slavery and systemic racism. In the presence of darkness and division, artistic expression brings forth the light of creation and community

Recognizing blues as a truly original American Art Form and the seed of all 21st century music, today"s House of Blues concerts feature all genres including rock, pop, soul, funk, R&B, gospel, hip-hop, country music and more. Throughout its eleven live music concert halls, House of Blues visualizes its message of Unity in Diversity on its God Wall ¬— an homage to the spiritual symbols of world religions. The reverberating message of the God Wall is to celebrate the differences that unite us — humanity"s shared endeavor to seek and express love, truth, and beauty.

House of Blues manifests an inside-out culture by embedding its mission and values throughout all facets of the organization. Employees participate in extensive training to foster an inclusive, respectful, and safe culture where people from all backgrounds can nourish creativity, curiosity and connection. The hanging of stage curtains in each venue which are a patchwork Crazy Quilts, is symbolic of black Americans’ escape from slavery through the Underground Railroad. Beneath each stage sits a metal box filled with Mississippi mud, representing blues as the spirit and foundation that pervades all performances. House of Blues’ Restaurant & Bar embraces a modern take on the culinary comforts known as .

Part of the magic of House of Blues is the pairing of all of the Southern art with art inspired by Eastern traditions, resulting in a seemingly impossible cohesive and even more impactful overall experience.

House of Blues" membership club, Foundation Room, showcases art, artifacts, and ambiance inspired by the founders" personal travels and devotion to Eastern spirituality. Developed with a nod to the plush style of old English clubrooms of London, these luxurious temples of music worship welcome members who are passionate about philanthropy, live music and community. 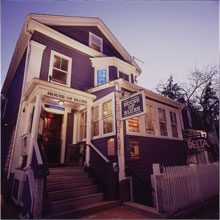 Membership dues and restaurant proceeds help support the company’s Music Forward Foundation, a 501© 3 non-profit organization that helps youth gain access and insight into the music industry. The program builds off our founders’ strong history of philanthropy, from building hospitals in India, to localized community efforts, and global scholastic programs that bring awareness to the history and impact of black American and blues culture.

Like no other enterprise, House of Blues consistently strives to build an ethos of cultural understanding and creative expression through music and art. It’s unique pursuit of peace, love, community, and acceptance guides the organization’s cultural development every day, and continues to gain new meaning and applications over the passing of time.